COVID Effects on
​Females in the Workplace 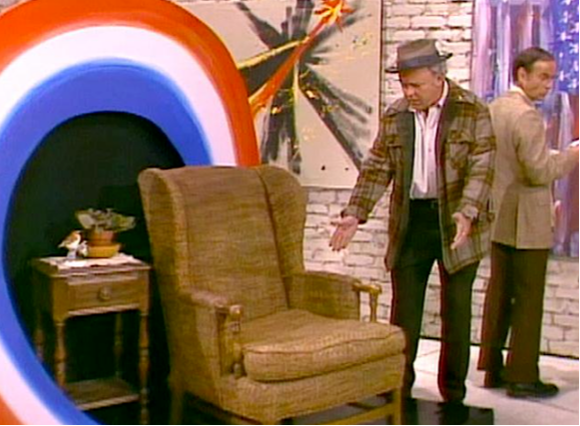 After (Son-in-Law) Mike accidentally breaks Archie's chair he has it repaired, however it mistakenly gets thrown out and ends up in an art exhibit.
Photo Credit: All in the Family TV Show, "Archie's Chair," aired January 15, 1977, developed by Norman Lear. ​
In 1971, Norman Lear created and launched a television character named Archie Bunker from the very popular TV Show titled All In The Family which ran for nine seasons.  Archie was modelled after Lear's father, Herman.  Today, in the National Museum of American History, "Archie’s Chair" is in the permanent collection.  For anyone who knows of the show and character Archie, seeing the chair might give a giggle or two. Archie Bunker represented the gruff, overbearing, bigot type from his time or generation.  As Lear put it, he was a personality maligned with inherited qualities of the average white male; misanthropy.  He was often heard saying the iconic phrase, “Stifle Yourself, Edith.” Edith's notorious response was to obediently stop speaking and often covering her mouth with her fingers in a sheepish way. Edith Bunker represented the traditional wife of her time, one who wasn't allowed to have a credit card of her own, own property as an independent, and frowned to work and continue education past high school years.  Stifled was the women of her time.  It was during this time however, Norman Lear has the viewers consider these architypes of Archie and Edith against the backdrop of a rapidly changing society. As the show progressed and perhaps as Archie aged, the character began to exhibit more tolerance towards all the diversity that was around him.

Although our times today are a different lifestyle of acceptance for women, things are still not early as advanced in areas, such as financial value in the workplace. Perhaps we have experienced these changes in ourselves. The pandemic has certainly asked each of us to do our part in understanding and respecting our neighbors by wearing a mask and standing 6-feet apart. In prior generations into recent days, women who worked while caring for family, children, and elders met the daily grind without much complaint.  A quieted expectation to nourish the family, dutifully unpaid, while following her ambitions of work, career, and financial independence was accepted in a way.

Managing or balancing both work and home were accommodated with adjustments. It would be executed with various twists and turns that may include relying on daycare to assist with the gap hours, or depending on ones affordability, hiring household help, or perhaps it was willing fathers pitching in. This opened the opportunity for women to move from traditional roles of teacher, nurse, and realtor to careers like lawyer, physician, scientist, accountant, and business executive, earning advanced degrees and breaking glass ceilings.

The 'double-duty" of working and life balance had gone full tilt with the pandemic.  These augmented necessities were evaporated, working from home became the norm, and school aged children now zooming their education next to their Moms and Dads conducting business on the same wi-fi account.
During the shutdown to slow down the spread of COVID-19, it is well documented that working women were hardest hit.  Nicknaming the situation a “she-cession,” women either lost their jobs at a higher rate than men or needed to step down from highly demanding roles to address their home-life as parent, caregiver and nourisher. One report noted that from April 2020 from the prior year, an increase of 22% more of actively working mothers living with school-aged children left the workforce. It affected fathers as well at 15.5% in the same time period. Although labor statistics are showing a return to the pre-pandemic employment, mothers are still dramatically affected with 75% of school aged students not in school full-time (as of this writing).

Deeper research shows that women may be in a position now, more than ever, to address these persistent issues. This crisis behind the health crisis is gaining national and international attention. In recent years, research has exhibited that women in the demographics known as millennials, are being faced with unexpected issues in the workplace that their former female professional (elders) may not have been able to address.  One of which is the pay gap.  Although working 9-to-5 (with a Dolly Parton tune playing in the background) was a feat unto itself, gender parity, as it is known, is the challenge of the moment.  States and some federal laws have taken some high roads towards labor laws, but there still is a glaring difference in how a women is paid in the same role if filled by a man.  In fact, Mckinsey has reported that if we "Act Now" on gender parity, GDP could increase by $13 trillion in 2030. 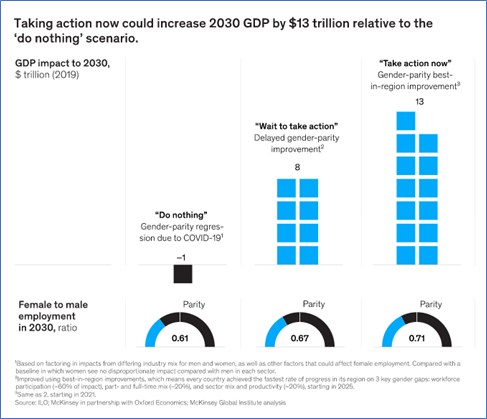 Here is a link to the report: https://www.mckinsey.com/featured-insights/gender-equalit
Now, more than ever, is an excellent time for the voices of women everywhere to be heard regarding the inherent sacrifices of being the nourisher.  There is societal obligation to address these issues and it can begin with a conversation.  As an example, the Healthcare Businesswomen’s Association is sponsoring a program called The 25th Hour.  It is a monthly conversation among members during a lunch hour over Zoom to share insights, exchange ideas and solutions to similar problems.  Mostly, it gives voice to the common struggles which have subtle and not-so-subtle nuances.  Corporations are supporting these types of groups for an outlet to give their employees who are facing the double duty of the working caregiver.